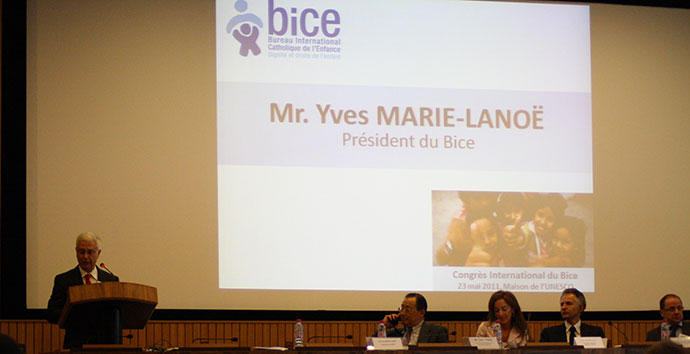 The BICE Conference was held at UNESCO headquarters in Paris

The conference took place on May 23rd at UNESCO headquarters, in Paris, with around 300 participants.

After the opening speeches by Mr TANG (Assistant Director-General for education at UNESCO), Mr ZIMERAY (French Ambassador for Human Rights), Mr CONTENT (President of the Apprentis d’Auteuil Foundation) and Mme MARIE-LANOE (President of BICE), presentations were given by the following experts, on new experiments to better address the educational needs of children in situations of family or social breakdown.

The day ended with a speech by Mr DELEVOYE, President of the Economic, Social and Environmental Council, and Mediator of the French Republic, who concluded with a fundamental issue at the heart of this conference.

See the video of his speech

Defending the rights of the child at the United Nations

A successful Tutors of Resilience training in Chile

Make a donation
As part of the General Data Protection Regulation (GDPR) you have the right to access, rectify, port, erase or restrict your data. We invite you to consult the page "Legal notices, privacy and cookies" for more information Accept Learn more
Necessary Always Enabled